The recent auction of Prime Minister Narendra Modi's most talked about Rs. 10 lac suit, with 'NARENDRA DAMODARDAS MODI' embroidered on it, was the top national news of the last week. The entire national media was tracking the 3-day event minute-by-minute to provide all the details again and again in their bid to ensure transparency in the auction held in Surat, the city of Diamond tycoons, from February 18 to 20.

The suit was worn by Modi for a couple of hours during his meeting with US President Barack Obama on January 25. The exact price of the suit and its source is a closely guarded secret and even media has either failed to find out or not willing to share the findings with general public.

The suit was finally sold out for Rs 4.31 crore to one Laljibhai Patel, a diamond merchant (a baron or a tycoon as per the media), who shot into prominence overnight by acquiring the suit at such a dirt cheap price. Mr. Patel is the chairman of Dharmanandan Diamonds Pvt. Ltd., Surat.

The original supplier of the suit, according to some press reports, has already clarified that the price of the controversial suit was just Rs. 7000/- and not Rs. 10,00,000/- as reported in the media and questioned by political opponents of Modi. Some clothing experts also believe that Modi's name on the suit is not embroidered but it is hand woven with gold thread. Nobody really claims to know the real price or cost of the suit but it is being debated even in prominent international media of UK and USA.

The entire proceeds of the auction will go to 'Clean Ganga Fund' which will be used for Prime Minister's Clean Ganga Project. There are reports circulating in media which indicate that the whole Auction event was already 'fixed' and attempts were made to create a hype to justify Modi wearing this suit, and as a damage control exercise. The questions being raised are regarding the place of the auction and the method adopted for the same. People are wondering as to why Mumbai or Delhi was not selected as the venue for the auction as they provided the natural choice of place at the national level. 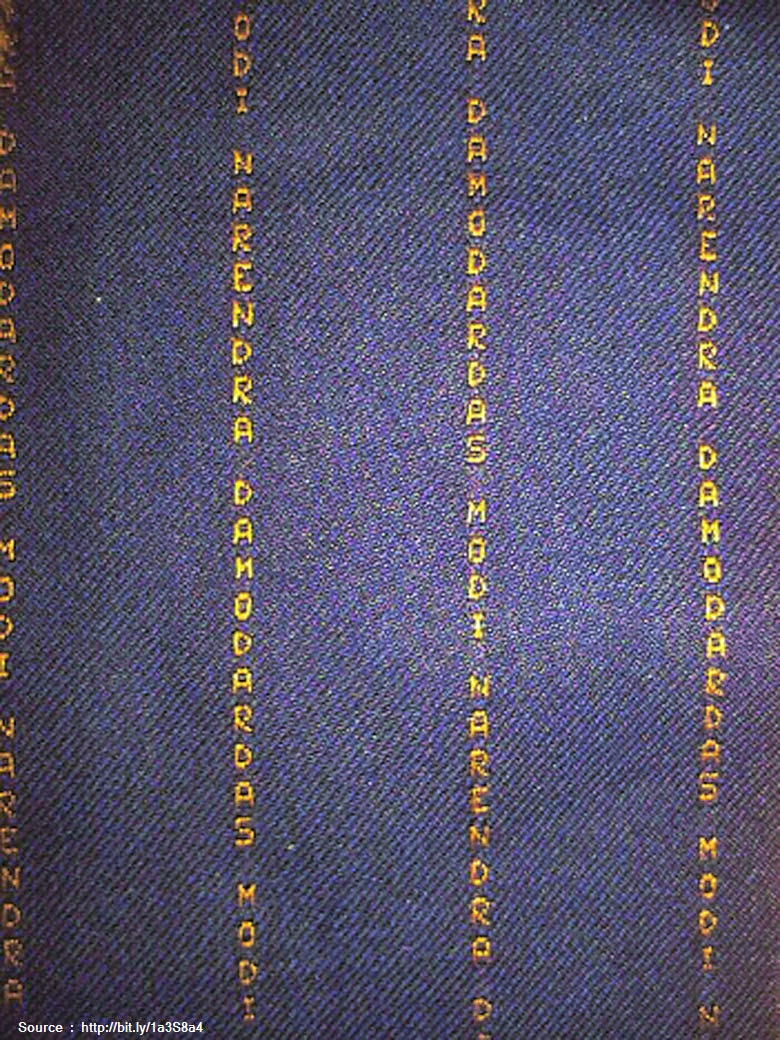 F4Fnews has learned from some highly placed sources from China that some leading textile companies, encouraged by the mad response received by Modi's suit, have prepared power point presentations for PM Modi to help him manage the entire cost of cleaning Ganga just from his iconic suit which just sold for Rs. 4.31 crore. According to some deliberately leaked information by these companies, one of the Chinese textile giants has offered 100 crore Modi suits to India @ Rs. 750/- per piece including the cost of fabric, stitching and the customized name "NARENDRA DAMODARDAS MODI" as per the original specifications. According to their proposal, the cost can come down to Rs. 600/- per piece if the name is 'printed' or 'embroidered' instead of 'hand-woven.' The proposed business plan envisages selling the suit depending on the time duration for which PM wears a particular suit. (Close up of Modi suit : Source)

According to some filtered reports coming from Washington, following base prices have been proposed by a group called "Friends of NaMo for Ganga" (FNG):


A key demand from BJP's NRI followers to provide an eBay-like 'buy-it-now' option is almost certain to be accepted to boost the sale of ModiSuits. "The 'buy-it-now' prices are likely to be fixed @ 10 times the base price, except for the item no. 1. This simple original item is dubbed as Common Man's Suit and will be made readily available @ Rs. 10,000/- for those who want to avoid the auction route and want to have 'buy-it-now' option," said an FNG insider who claims to be an outsider.

F4Fnews has also learned from Modi bashers (who have formed an exclusive group named, "Suit Loot Virodhi Manch (SLVM) to cash-on the Modi suit controversy), that Modi followers have already set up a NaMo Ganga Suit Fund (NGSF) where all the money collected from the sale of China made Modi suits would be deposited. The Manch also claims that the funds thus collected will be used for Ganga Cleaning purposes only during the period when one or the other election is taking place in the country because of the Election Commission's very restrictive spending guidelines. SLVM, suspected to be funded by powerful Modi opponents (including those within the BJP), is reported to be tracking all the ModiSuit-related developments globally.

An official, who claimed to be the president of SLVM, told F4Fnews (OCOA): "It is almost certain that the NGSF is going to place the order of suits to a state-owned Chinese textile firm in a bid to please President Xi Jinping of China who, many senior BJPians feel, was not happy with Modi's excessive courtesies to Obama in spite of those being just symbolic." "The major obstacles seem to be related with the price and 'Made in China' tag, and to some extent, pertaining to the final logistics and conformity issues," he added.

When contacted, NGSF initially denied its existence. But when F4Fnews conveyed SLVM's claims to their office, NGSF's Washington based spokesperson said: "For us the first priority is Ganga Cleaning and we want to help the country by contributing our innovative ideas for selling the immensely popular ModiSuit worldwide. We also wish to monetarily help the Ganga Cleaning Project by buying ModiSuits in large numbers."

Suits to have 'Make In India' Label NOT 'Made In China'

Another senior official (probably belonging to NGSF), based in New Delhi, told one of our sources: "Yes, we have almost finalized the order. We want the Chinese firm to provide 50 crore ModiSuits to us at the price quoted by them because we don't want to take any risk by ordering 100 crore suits looking to the slowly declining popularity of our beloved leader." "We have also asked the supplier to put 'Make in India' tag to popularize our leader's pet project to promote India as the world's manufacturing hub," he added, strongly refuting the charges that ModiSuits will have 'Made in China' tags.

The SuitGame can lead to Creation of Deputy PM's post

F4Fnews sources in New Delhi also tried to contact at least 10 to 15 senior BJP leaders for their comments and feedback but could manage response from only one leader who has been now sidelined due to his very ambitious tendencies despite his age being above 75. This leader was keen to be quoted by us but we declined his request to avoid the risk to our own channel. This leader was candid in his remark: "I know how and why the SuitGame is being played within our party and by whom. But as a disciplined retired soldier, I would not like to comment on this aspect of the suit." He expressed his concern for the country by highlighting the practicality of turning the Suit into ModiSuit and selling it at such a massive scale. "The idea is good but I don't think Modi has so much of time to wear such a large number of suits to turn them into ModiSuits eligible for the auction. With 50 crore suits, he will find his first five year term short to wear them even if he spends 24 hours wearing, changing and again wearing the suits so as to meet the demand. It is just not possible for him to physically do it," he added. He said a country's PM has lot of important things to do. "If Modi just confines himself to wearing suits only, he will have no time for anything else and the country will face serious governance gap unless he brings me back for doing PM's job," he said. "And believe me, I am honestly willing to accept Deputy PM's post to do PM's job for the country so that Modi can concentrate to make his Suit project successful," he added.

The Chinese companies are expecting a flood of orders from India for such personal VIP clothing items with monogram from host of political parties for their top leaders for fund raising and also for electioneering. These companies have advised parties to place their orders before December 31, 2015 if they want to get the ready material well in time for use in the next General Elections in 2018. They are also trying to promote such items in the United States as well, particularly among those NRIs who are known to be politically involved and active in the 2018 presidential elections.

The stalwarts of the Indian textile industry have privately expressed their displeasure over the huge suit order going to China but have so far refrained from saying anything publicly. They are expecting favors in the coming Union Budget. They might decide their course of action after assessing the 2015-16 Budget proposals. Incidentally, the order for 50 crore suits is also expected to be released within a week after the Budget when the dust over the Budget gets settled down. In any case, the Indian textile industry is feeling a sense of defeat in the entire SuitGame business.

F4Fnews is closely watching the politics behind the ModiSuit, both within and outside the BJP, and will keep itself informed and updated in spite of several hurdles. The auction of Modi's suit has received mixed reactions. Shiv Sena, BJP's own ally in NDA, has already supported the 'Suit Auction' in its editorial in 'Saamana' terming it PM Modi's strategic plan to bring back black money as promised by him.

Other products in pipeline

F4Fnews wants to go to the bottom of the SuitGate and find out whether this is going to be an isolated case or a small trial step to create a Mega Modi Brand by introducing other products in the range. We also want to find out whether other parties have similar ambitions to sell their leaders' popularity. Already, people in India are talking about a popular 'Muffler' brand which caused tsunami in Delhi.

GD Jasuja : Founder, Faking4Fun
(Don't) Follow us on Twitter @F4FNews at your own risk
News items on this website are manufacured in the writer's own in-house plant for his own captive consumption. No Rights Reserved, or Unreserved. F4Fnews.com
at February 23, 2015