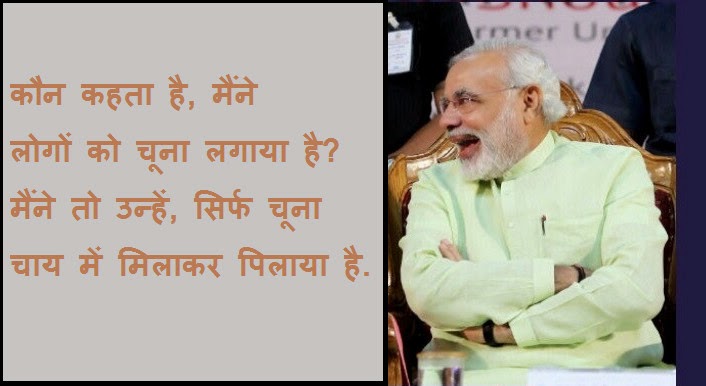 Admissions to open soon for the Post Graduate Diploma in Tea Technology and Management (Equivalent to Ph.D.).

Shocked by the meteoric rise of Narendra Damodardas Modi in politics, from a small time tea seller to India's Prime Minister, political scientists, the world over, decided to explore the possible role of the art of successfully making and marketing Indian tea in political science in India and elsewhere. As a first step, a number of influential NRIs with close links with top leadership of Congress party have come together and launched an exclusively dedicated institute named IITTM.

"The idea is to explore the entire 'Tea Environment' as a political tool to transform the present day budding politicians into smart and successful leaders of tomorrow", said director of the institute without giving any details about himself or the institute. However, we have learned from our independent sources that the director appointed is one of the top tea tasters who left his lucrative job at a leading company that owns huge tea gardens in Assam and Darjeeling.

We have also learned from our informers that the institute will start functioning from July this year. Initially, it will function at a temporary secret location and no public announcement regarding the admission is expected because the first batch is likely to be exclusively for senior Congress leaders who have been either an MLA or MP during the last 10 years. They will undergo a condensed course of 6 months similar to the IIMs' loss-making Management Education Programme (MEP). The regular course, which will commence from next year at an ultra-modern 'smart campus' in Noida, is going to be a 6-Year Integrated Course PGDTTM - the Post Graduate Diploma in Tea Technology and Management (equivalent to a doctorate degree - Ph.D.). F4Fnews is keeping a close watch on all the rumoured sites of the institute because the construction work is going to begin any time soon now.

A person who claimed to be the driver (code-named, Manoj) of a senior Congress leader told F4Fnews (OCOA) that he had been assured of admission in the first batch which would be officially inaugurated on January 30, 2017. However, he could not control his excitement and in a spur of the moment revealed that his boss had signed an MoU with him according to which once Manoj became a leader (from driver) after completing the course (that could happen only after 2023), his boss would get 50% share of all gains made by Manoj during the next 15 years. A kind of donation Manoj would have to make in return of the confirmed admission to IITTM.

When asked about the date of inauguration of the IITTM, which happens to be the 69th Anniversary of Mahatma Gandhi's PunyaTithi, surprisingly, the newly appointed director of the institute was quite forthcoming. "The date has nothing to do with Mahatma Gandhi. As a matter of fact the Congress chief Sonia madam is so impressed with Barack Obama that she wanted him to inaugurate the IITTM. Since Obama's term ends on January 20, 2017, his earliest availability date was January 30 and we immediately agreed to his suggested date fearing he might change his mind if we kept it open," he said. "Obama is likely to be on the panel of advisers of the institute, too," he added.

(Don't) Follow us on Twitter @F4FNews at your own risk
News items on this website are manufacured in the writer's own in-house plant for his own captive consumption. No Rights Reserved, or Unreserved. F4Fnews.com
at April 01, 2015